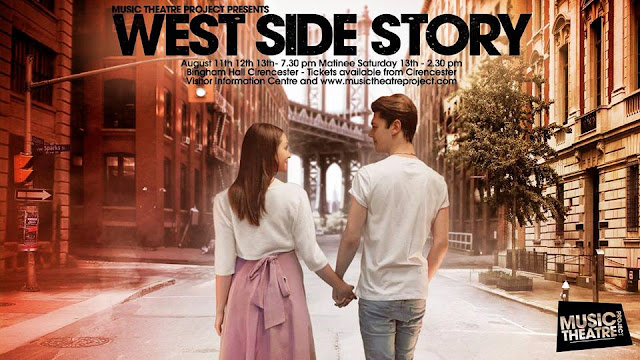 With a great cast to build on, this production of West Side Story was complimented by an excellent set. One of the most notable things was the high quality of the music. With strings played expertly, the music brought a swelling and discordant atmosphere. Of course West Side Story was not going to be a fairy tale. Dealing with the clash of cultures in 1950s New York, the music by Leonard Bernstein exemplified the racket of ethnicities crashing together violently.

Daniel Holley stood out playing Tony, with a show stopping version of Maria. Having performed in Cirencester from a young age, Daniel has had experience in Germany and developed a great vocal strength and flexibility you’d expect from a musical theatre star. The duets were very high calibre too.

Across the board there was a depth of quality that will surely see many of the actors growing their resumes. The night was sold out and the venue was on top form too, with a great bar provided by the Vaults and the hall set up in such a way as to ensure the greatest enjoyment.

The Music Theatre Project is certainly a stamp of quality. Don’t miss out on the next fun musical, Urinetown at the Barn Theatre! Running from 8th to 10th September, it is certain to be a fascinating comedy. Find out more here.

To keep up to date with MTP and it's shows, like them on Facebok! www.facebook.com/musictheatreproject
Posted by KPN at 05:14