Free First Lesson: Ashtanga Yoga That can Open you up to a World of Flexibility... 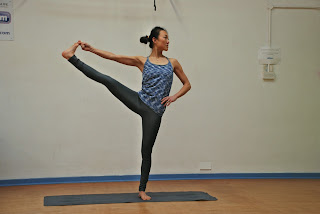 Noriko Spencer comes to Cirencester three days a week to teach yoga at Active4Less. Her company Ashtanga Yoga Connection is an ideal aid to stiffness or stress. Being flexible is useful in all day to day situations, and can enhance people's quality of life at any age.

Noriko, from Japan, has been teaching in Cirencester since April and her loyal students have made great improvements under her tutelege. With the first lesson free, there is nothing to lose in giving these stimulating lessons a shot. At only £5 a lesson from then on, this cheap and enjoyable way to relax will leave a lasting impression on your body and mind. 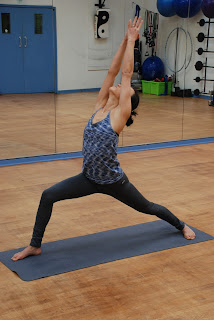 Noriko teaches three times a week in Cirencester. The dates are Monday 12.30-1.30pm, Wedsnesday 12.00-1pm and Friday 5.30-6.30pm. With a friendly teacher and class, people of all abilities are welcome.


A well selected and diverse line up hit the stage for the Brewery Blues, Evan Burgess reviewed last night's performance...

Starting off the night was convenient at Made By Bob, with great food on offer and friendly and helpful staff, Made By Bob has something for everyone. An ideal place to eat whatever time of day, it was particularly rewarding as the reasonably priced starters sated the appetite, yet left enough room for a dance later.

The sold out night at the Brewery Blues was no doubt a lot due to local openers A New Leaf. With lovely harmonies and defined song structures, everything was pitch-perfect. With a debut record out later in the year, they’re definitely ones to watch for the future.

After the confident start, Salisbury based solo artist Antoine Architeuthis took to the stage with his lovely bouzouki. The 8-stringed instrument gave a slight mandolin feel but had the depth of a guitar. Accompanying himself with a loop station and drum machine, the tunes hit the spot and were entertaining. Getting the audience to join in a chorus was a nice touch and endeared Antoine to the crowd.


Headline band Soular may have experienced a bit of a drop off in crowd numbers, but they more than made up for that by the enthusiasm the audience put into dancing. With a loving crowd joining in with the well picked covers, it was no wonder this band were picked as headliners. With powerful vocals by Dolly James covers of acts like Stevie Wonder and Diana Ross fit well together in a tight set. By the end of the night people still wanted to dance and Soular came back for an encore.
Posted by KPN at 06:56 No comments:

Light Blue Cube on display at the Pop Up Gallery

Light Blue Cube is the brain child of locally based Canadian artist Lorenz Freiberg, and well worth checking out on a rainy day, Evan Burgess found out more...


Light Blue Cube Ceramics Studio is exhibiting at New Brewery Arts’ Pop Up Gallery. The exhibition, titled elements, has delicately refined ceramic pieces on display. Most pieces represent one of the four elements, but there are exceptions, such as a popular ceramic puma. Already in its first week, Lorenz Freiberg, the artist behind the studio, has found Cirencester to be full of art lovers.
Freiberg, a Canadian national, has other beautiful wildlife in his art such as bears and birds. These hand-made pieces are available to see in person until Sunday 21st June. Whilst some of the art is ornamental, other pieces are quite useable day to day. In particular the ceramic light shades, which offer a fiery glow when the bulb is on.

There are often features in the art that might not be noticed with just a short glance. Fossil outlines are designed into some of the ceramic pieces , when in others faces erupt from the wall as lifelike visages oversee the exhibition. Pointing to one of them, Lorenz states with a smile, “I can’t hang this in my house because it scares my wife”, indeed it is a rather potent work which would be as at home in a chic cafe or a bohemian study.

If you would like to find out more, pop into the Pop Up Gallery before the 21st or visit Lorenz’s website, www.lightbluecube.co.uk Both commissions and original work are available, and what better way of decorating your home than supporting a locally based artist.
Like Light Blue Cube on facebook here.

With a free bar to celebrate opening, Toro Lounge in Cricklade Street impressed a vast throng of locals on its first night...

Toro Lounge endeared itself to the local foodies with a packed opening night showcasing a well decorated interior with an expansive balcony.

The food on offer was well presented and enjoyed by the diverse crowd. Reasonable prices mean that Toro Lounge has something for everyone. Friendly staff worked hard to provide intricate cocktails which on a warm night were very welcome.

The Falafel burger was tasty and the accompanying fries were a little out of the ordinary with a rustic flavour. The tapas menu was popular with the new comers and allowed for people to easily share and tuck into their favourite items.

Cocktails on offer included the usual mojitos, but some had been devised in house. Open until 11pm, this central eatery is an idea place to start a night 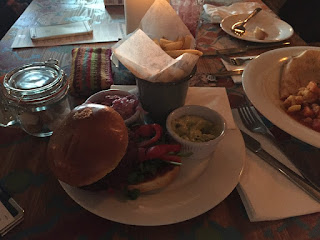 out. The view from the balcony is illuminating as there aren't many other public views from the angle Toro Lounge provides. Definitely a place worth dining at, we can heartily recommend this growing chain.

Toro Lounge is located next to Monsoon in Cricklade Street.