From today until the 19th July, you can see a collaborative exhibition at the Corinium Museum featuring a large and varied group of art from contributors to Cotswold Open Studios. The exhibition is curated by Richard Kenton Webb. The show provides a snapshot in the centre of town, making a hub of the Museum. If you like a particular artist, you can find where they will be doing the more extensive exhibit. Head on down and plan your route for the weekend 29th-30th June!

Bring Your Wellies and Festival Gear to Seventeen Black This Friday! Seventeen Stock is on! 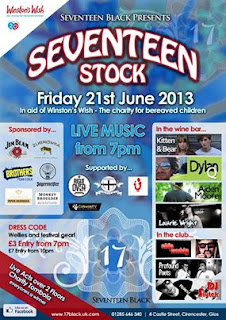 From 7pm this Friday Seventeen Stock, the annual charity fundraiser at Seventeen Black, will take place! With lots of local artists, the festival themed night out will raise money for Winston’s Wish. Winston’s Wish supports bereaved children after their loss.


The year before, Seventeen Black supported the Lyndsey Roughton Purple Heart Foundation and raised £1200. Hoping to better it, lots of companies have opted in to sponsor the event. Jim Beam, Pipir Heidsieck Champagne and Jagermeister are but a few of the well known international brands, but local businesses including Decimal Skate Store are backing fundraising.


A £3 charity tombola has prizes provided by Zubrowka Vodka, Brothers Cider and other sponsors. Whilst you catch up with and/or make new mates, great music will be on. Bands and acts including Kitten and Bear, Dylan Q and Laurie Wright will be providing entertainment!

Get the chance to see the art of Pirates of the Caribbean concept artist Darrell Warner plus visit Laurence Llwelyn-Bowen’s in action!


Runner up to the Chamber of Commerce Business awards “Creative Champion”, Tessa Webb is firmly ensconced in the local artistic community. And what a community it is, hidden away in the middle of nowhere, great things reside. Though no one would see Cirencester as an artistic hub, artists make themselves at home, perhaps because they deliberately want to avoid a clique or the illusion of stylistic walls that a scene would require.


Weaving them together and rounding up this herd of cats is Tessa Webb, founder of Creatives Into Business. Running courses such as Artists Into Business and Designers and Photographers into Business, her experience helps the core values of marketing calibrate to a multitude of businesses. 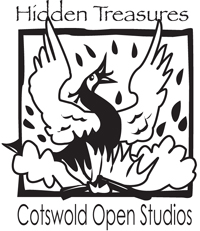 Hidden treasures is an accurate title for the tour of studios. Aided and abetted by a vintage bus "Old Babs" provided by Alexcars of Cirencester, those fortunate enough to have tickets can cruise to 18 locations over the weekend, with some locations having more than one display. Of course making your own way will be quite welcome, with 5 hubs in walking distance of the town centre, including the New Brewery Arts and Corinium Museum. The Museum will already have its doors opened to the Open Studios by the 22nd June.


Notable artists include Darrell Warner, who has been an influential concept artist for Warner Bros, having his sketches utilised for Pirates of the Caribbean and Captain America. Laurence Llwelyn-Bowen will be displaying in the centre of town at 21 Market Place. The classically trained artist is proficient in more than interior design, having said that, he is finding new success as Changing Rooms is now airing in China. Sophie Ryder, whose Hare and Minotaur work is well known on the Cheltenham Promenade, will be one of several artists displaying at the Wet Paint Gallery.


To find out more about the tour click here.
www.creativesintobusiness.com
Posted by KPN at 05:00 No comments:


University of West of England comes to town!..

The Corinium Museum is a constant supporter of the arts. Having such a wonderful location directly in the centre of town, and hosting the Visitor Information Centre, the museum is a portal to the town. The gallery next to the V.I.C. is frequently changed so there is an incentive for repeat visits. But what hasn’t been done until this night was letting the art creep and crawl into the deepest depths of the museum.


With such wonderful exhibits, adding a fresh twist of modern art displayed next to culture from hundreds of years ago was a cool and refreshing experience. From an anthropological point of view, having modern and historic clash meant an examination of what makes us human. What was regarded as valuable in past civilizations and artistic is no doubt very different, but the fact that art and craft has been a constant companion to the Saxons and the students was a good enough reason. 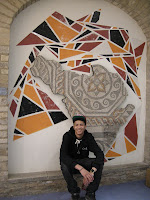 Whilst walking through the museum I saw a man transfixed at the Saxon display, he clearly had come for the modern art, and the museum indeed would not be open otherwise, but he took his time feasting his eyes on the well constructed displays. 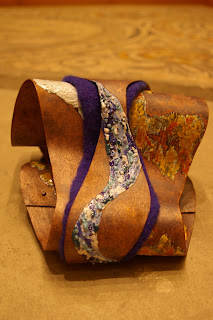 The scenario was win-win, if the students sold a piece that night the museum would get a commission, and the students would have a great experience and footnote to add to their portfolio. With that, the people who came to regard the display saw something quite unique. That is the reason why this kind of thing needs to keep occurring.


Emma.Stuart@cotswold.gov.uk
Posted by KPN at 05:12 No comments:

Mirjami Design can be found in the Brewery Court Cirencester...


Hidden away in the alley behind the Brewery Arts Centre and underneath the Cafe, lies a shop filled up with trinkets and larger decorative pieces. Pumpkin poofs are set out on top of each other a bit like giant pin cushions. Mirjami Design is the studio and shop of Laura Mirjami, a Finn who came to England and decided to set up a business dealing in exclusive handmade items.


﻿
The smaller items would appeal to any youngster who ventured past. To a child, seeing small bears, penguins or mice in ornate and tiny scale might make them think of teddies in miniature! In fact, these are dense paper weights that are deceptively heavy.


﻿
﻿
These lovingly prepared items are ideal presents to adults in an office who don’t get much time to embrace the child within! Rustic and homely, the well presented pieces have an element about them that makes you want to squeeze their tiny faces!


With general lines of products available, bespoke commissions can also be crafted. Laura’s work sells mostly outside of Cirencester, but accompanied by her dog Pixie, the studio offers a breath of fresh air to any worn out shopper who wants to see something less commercial and more unique.


Quirky items such as book marks in the form of different animals such as foxes are light enough to fit in the post and sufficiently cost effective to allow most to leave with a memento.

In combination with a cup of coffee and a wonder around the New Brewery Arts, Mirjami Design grasps the spirit of the centre and may well ignite your imagination when it next comes to buying a gift!

Zane Meldere Article No.2: Why women should lift weights


Most women wouldn’t want a six pack, maybe something a little less intense, a flat stomach? It’s a noble goal. However, it’s amazing that people with no orientation or experience in exercise would probably think to achieve this goal, dieting/starving and running are the solution. Intuition often comes from your past experiences, and if you have no experience of exercise, you will get quite stuck. In fact, reducing your calories may be the last thing you want to do. Why? Because the highest contributor to increasing your metabolism is digestion. Digestion of high fibre and high protein sources, which aid muscle growth, will build a tighter body.


Diet alone is not enough. Lifting weights may indeed not have a handy calorie counter, and in fact would not burn as many calories during the period of exercise an hour’s running would, but it has two key advantages. Your calories will be burnt for 24 hours after lifting weights whilst running’s impact stops almost instantly, weights are also supportive of your ligaments and joints opposed to running. It’s a bit like the difference between earning money in a job, and accumulating interest with savings. There is an instant impact with cardio or clocking on, but as soon as you stop the activity the effect is lost. There comes a point where the steady weight lifting strategy compounds its results beyond the small amount of time spent exercising. This is called the after “burn effect”.


So, why do Women not do it Already?


There are many preconceptions about weight training and body building in both the female and male world. However, one of the biggest reasons ladies would feel uncomfortable weight training is the belief 1: it leads to a masculine form, and 2: they are not welcome in the free weights zone.


Of course, men are not always the best communicators, and being in a gym can seem an unfriendly environment. You may think people can sense your insecurity, but in reality they probably have no idea you have your eye on a piece of equipment. A personal trainer can help you build your confidence in how to approach the gym and make best use of its facilities.


Lifting weights will increase a ladies everyday strength and posture whilst making them leaner even if they weigh the same. With that, osteoporosis which mostly affects women can be avoided with weight training and the diet that goes with it. The combined effects of these two forces counteract the western problem of Type II diabetes.


Stress reduction is also a key problem in today’s living. Cortisol is a hormone that causes feelings of stress and fat accumulation. Good exercise and diet can counteract it. With that, the body’s response to insulin can be increased through a better diet and training method. Eating for weight lifting usually means a reduction in carbs especially low quality ones, which are a huge contributor to insulin spikes and sugar lows.


Zane’s client Allison used to only run, but after a year’s training is more flexible, stronger, and has a more feminine form. She recommends weight training to any woman.