THE SECRET GARDEN - A MUSICAL

The Secret Garden, the first professional production by The Barn Theatre, was performed on Monday evening to an enthusiastic audience of press and VIPs.


It was an absolute delight.

Based on the children’s book by Frances Hodgson Burnett, this innovative musical adaptation, directed by Dominic Shaw, brought together possibly the most talented assemblage of actors ever to perform on a Cirencester stage.

Where Lucy Simon’s original score required a twenty-five piece orchestra, Dominic instead exploited the musical abilities of the cast, with instruments ranging from guitar and piano to accordion and cajon drum box, to rework it, producing an upbeat folk-rock vibe which kept the show moving apace. This contrasted perfectly with the haunting melodies of the ghost of Lily Craven, played by Jaimie Pruden, making her UK stage debut.


Mary Lennox, was wonderfully acted by Daniella Piper with the required pouts, obstinacy and single-mindedness of a 10 year old.  Within this dark tale of despair and rejuvenation, where both the haunted characters and the eponymous garden is brought back to life and purpose by the determination of this child, there were some welcome interludes of comedy and sheer joy.

The interaction between Archie’s housekeeper, Martha – played well by Jenny O’Leary, and the stubborn Mary, was very entertaining, as was Mary’s relationship with Dickon, Martha’s maverick but kindly brother, played with rock-star presence by Alex James-Ellison.


Overcoming the restrictions posed by the limited space, the cast used puppets to represent both the dearly departed and the sickly child Colin, although at times this became confusing, as Colin’s puppeteer, Celeste de Veazey, was actually acting the part of Colin too. If you didn’t know the story the plot was a little difficult to follow, so it would be well worth reading a synopsis beforehand.


But these are minor points, as the acting and musical virtuosity of the cast created a magical and captivating experience which fully deserved the standing ovation it received from the packed audience.

The show, at Cirencester’s first professional theatre, runs from 21st March until 15th April and should not be missed. Tickets are from £14.

For full details and to book, go to www.barntheatre.org.uk. 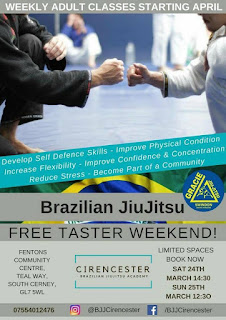 Brazillian Jiu Jitsu will be starting regularly in South Cerney, only a five minute ride from the Cirencester town centre. Sat 24th and Sun 25th will see free taster sessions for all comers.

Affiliated to Gracie Swindon's black belt Lucus Luz, Connor Heaven will be teaching classes at Fentons Community Centre. With classes in the week and at the weekend, it's easy for anyone to pursue this exciting hobby.

For anyone not in the know, BJJ is a grappling art from South America. Requiring very little equipment it is easy to take part in, but very hard to master! Therefore the greatest expense will always be the time put into training.

Far better than a computer game, but just as addictive, BJJ will no doubt suit anyone wishing to discover more about themselves. For more details check the flier!
Posted by KPN at 08:50 No comments: