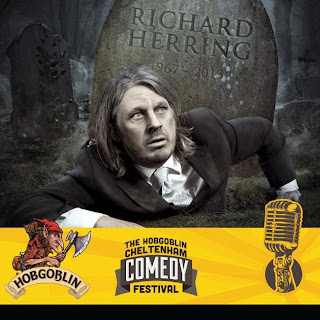 The man on stage was clearly well rehearsed and versed on many taboo busting views on death. “Why do people say ‘At least they didn’t have kids’ when someone dies? Surely that is a good thing!” he states to laughter and discomfort as we all faced our own mortality. Explaining how he hoped to leave a legacy by attaching his name to a certain male body party, Herring won over the audience despite the morbid and undoubtedly offensive material.

Offensive it was, but it is the reality we will all pass away, apart from Richard though, who is currently convinced he is immortal as he has no proof to the contrary. The topics picked up on through the spectrum of death were despicably funny and gallows humour of the darkest nature. Quite probably he’s had the odd remonstration, but it is just a show. Most people who wouldn’t want to see it would probably be put off by the show title “We’re all going to die”.

People die in many quite frankly, ridiculous ways. Richard’s programme, or “bookazine” as he took to referring to it, was a free hand out to the crowd and had a list of humorous passings. Though distinctly morbid, the crowd were in raptures of applause and at the end money was raised for the charity Scope through collections at the end. Having done this over the years Richard has managed to raise over £100,000 for the charity. Macabre yet hopeful, bring on a new show!
Posted by KPN at 04:07