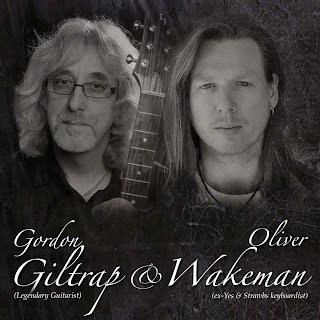 Oliver Wakeman came to town on the 4th October to the wonderful Sundial Theatre, promoting his album with collaborator Gordon Giltrap, "Ravens and Lullabies", Evan Burgess found out more about Oliver´s extensive musical experience including how to avoid fate!..

EB: Are you the type of person who loves to tour, or do you miss home comforts?
OW: I enjoy both. When I finished touring with the rock band YES I worked out that I was away from home for over 12 months in total over a 3 year period which is quite a large amount of time to have been away.

But with modern communication getting better all the time I never felt too far away from my family. I'd call them everyday on Skype and watch them sit down for an evening meal and join in conversations which was a bit strange but kind of fun. Especially if I was on the other side of the world and having breakfast...!

I have spent the last year only touring the UK and Channel Islands so I haven't been away from home too much which has been great. Particularly as I now have a baby daughter as well as an 8 year old son and so I have enjoyed being around to help my wife out with the kids.

EB: What makes working with another artist rewarding?
OW: The exchange of ideas is always very inspiring. When I write or perform with another musician I find that seeing how some else approaches music and writing can alter the way that I play and write. I find myself doing things in a slightly different way to fit with the other persons style. I'm always keen to learn more and understanding the approach of another musician isn't something that can be learned from a textbook, it only comes from immersing yourself in other peoples style of music.


EB: When you get inspired, how quick are you to get an idea down, do you ever find yourself accumulating bits of paper with jotted notes, or do you have a more organised approach to creating?
OW: I have a Dictaphone app in my iPhone and am always singing little ideas into that. I find that really useful and much better than the old way I had which was phoning the home phone and singing to the answer machine...

Once I have a collection of ideas that work I start arranging the piece using my Pro-tools studio system at my home and slowly an organised finished piece emerges.


EB: What is the worst food you've settled for on tour?
OW: I had a chicken breast in Rome which was not cooked properly at all. A well trained vet could probably have saved it...

I remember sending it back. I don't think the chef was too pleased but I didn't fancy when it came back and left with out finishing the meal. There may have been others but that sticks in my mind...

EB: Going to different cities, do you get a chance to look around them, or is it more like a changing planes at an airport?
OW: I always try and find some time to look around a bit otherwise I know I'd end up regretting it if I had just sat in a hotel room.

I remember being in Washington DC for a concert and only having an hour to spare and so someone from the venue drove me to the White House to get some photos just so I could remember being there.

I've been very lucky though on tour managing to see many great sights around the world that I would probably not seen if I wasn't a musician. I also take the opportunity to meet other musicians that are playing on tours when I've had a night off as it's great to hang out with people who are living a similar lifestyle.


EB: Do you need a solid routine when playing live, or can you just switch on to performing mode?
OW: No routines at all. I find that it would just get in the way. I've had occasions where time has been so tight that I wouldn't have had time for a routine anyway.

I was in my room watching the news on TV when they showed footage from a helicopter with a stage structure that had been hit by a tornado and had collapsed onto a keyboard rig. I then realised that I was looking at my keyboard rig ruined on TV. I was so glad I hadn't gone because if I'd had a strict routine I could have been hit by the lighting rig section of the stage and might not be around to tell you about it.