The Barn Theatre: Hound of the Baskervilles Review

A Comedic Romp over Dartmoor!
Review of The Hound of the Baskervilles, Barn Theatre till 24th November
by Carlo Vuolo

Just three actors take on multiple roles in this side-splitting mixture of comedy, farce, slapstick and dreadful puns. The main characters, Sherlock Holmes (Herb Cuanalo), Dr Watson (Hywel Dowsell) and Sir Henry Baskerville (Dominic Brewer) provide the backbone of the story, both in character and in conversation with the audience as themselves. Other characters, both incidental and pivot 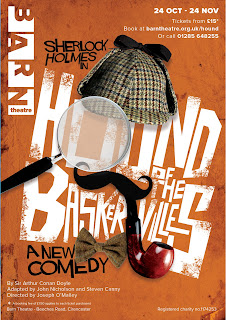 al to the developing plotline, are introduced via quick costume changes which leads to much mirth throughout. Indeed, the characters of Stapleton and his supposed Brazilian wife, Cecile, both played by Herb Cuanalo, provide the most memorable comedy moments, with the former meeting his deserved end when he is swallowed whole by the Dartmoor swamp, complete with realistic 'bog-sucking' effects.

Indeed, all the sound and lighting effects, courtesy of the Barn Theatre’s state-of-the-art technical wizardry, mean that the whole performance moves at such a fast pace that there is barely time to pause for breath as the laughs just keep coming in this comic romp across Dartmoor. Don’t miss the start of the second half, when the cast relive the whole of the first half in a matter of a few minutes, with the inevitable hilarious consequences of mixed-up costumes, props and characters.

This is a far cry from the famous film starring Basil Rathbone. Another triumph for Iwan Lewis and the team at The Barn Theatre, and another show that really should not be missed.

***Be aware that strobe lighting is used from time to time throughout the performance.***