A diverse selection of attractions came to Cirencester Park for the Cotswold Show...

Of all the things I had expected to see at the Cotswold Show, a pug running an agility course was not one of them. However, the limber hound managed to perform with impressive discipline, scaling an 8 foot high a-frame and jumping over obstacles like a thoroughbred horse.

With a broad selection of food, crafts and exhibitions, the Cotswold show was busy through rain or shine. Mostly the sun came out and provided a much appreciated summer ambiance. Despite the rain, the atmosphere stayed welcoming and engaging. 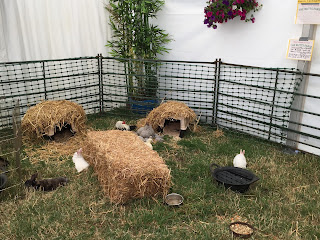 A bike stunt team put on an excellent show in one of the enclosures. Hopping from 7ft onto a cardboard cup was one thing, but when the cup was between the announcers legs, an added element of risk was thrown in. Not happy with just that, one of the riders took their front wheel off to pull some stunts on an improvised unicycle. Why not?

Other more conventional, yet endearing, displays were exemplified by Butt's Farm Rarebreeds. Piglets, a mule and lots of other animals were a hit with all ages. In the adjacent tent large bulls, goats and lambs were making friends with the crowd.

Though animal centric, there were plenty of activities to take part in. I tried my hand at archery and .22 rifle shooting. The rifle range was easy to use and enjoyable, ran by Regency Rifles. The archery on the other hand was harder for me to master, but explained well. It was odd to trust my body to stand in the correct stance and ignore where the arrow was pointing. Guided by one of the instructors, the counter intuitive nature of the skill was coached patiently. For £4, I improved a great deal from the beginning to end of the experience.

Next year won't arrive too soon! For more information on the covered parts of the show, visit their websites.
http://buttsfarmrarebreeds.co.uk/
http://birdshilldays.com/clay-shooting/
http://www.zerogravity.uk.com/

Evan Burgess looked into fighting styles of days gone by and discovered Wessex School of Arms in Bath...

There are many popular martial arts today such as MMA, Krav Maga and Asian disciplines. However, if you have ever been curious about what happened in Europe before these styles reached our shores, HEMA might be for you. Historical European Martial Arts is a practical use of old techniques. Best practice is taught from the rivers of knowledge surrounding combat from Italy, Germany, Britain and other places.

The focus of HEMA is mostly between 1300 and 1800. The skills are both technical and physically challenging, so when I went to Wessex School of Arms in Bath, I was curious about how everything worked.

The lesson on this night was about backsword technique. This sword is one handed and principally for thrusting and slashing. Sounds simple, but when someone else had one defence becomes the priority. Being a responsive style of learning, a pupil must defend themselves before launching an attack.
With plastic practice swords, the first part of the lesson was about different methods of blocking. Though there aren’t a large amount of stances, the difficultly comes from coordinating hand and foot placement. Teamed up in twos, the pragmantic use of responding to an opponent was drilled as myself and my partner worked on a simple block and counter routine.

In this style, less is more. Understanding the arc of attack an opponent has is vital in blocking effectively and protecting oneself. A lot of the initial techniques felt counter intuitive, yet they are tried and tested through hundreds of years of utilisation.

After technique training with the plastic swords, I moved on to blunt edged metal swords which were a rather different sensation. Heavier and more powerful, the ring of metal against metal reverberated through my bones. It was fun, but also developed more concentration with the realism increasing.

Being my first lesson, I didn’t take part in the group spa at the end. With three against three, two teams took on each other with plastic swords in order to score points for contact. Each round was over surprisingly quickly and it brought home just how fast things would happen in real life.
On another night the lesson could have been daggers, quarter staff or hand to hand fighting. Good for fitness and historical awareness, Wessex School of Arms provides a thrilling experience for people of all abilities. Sessions cost £8 and last for 1 ½ hours.

You can find out more here:

Taking part in this endeavour are 11 locals acts with space for an open mic at midnight. A raffle will take place in the evening. With a great deal of entertainment and the chance of prizes to be won, the event will start at 3pm and finish late. Pop in or stay for the whole night, there won’t be an uneventful moment.

The running order is as follows:

If you cannot make it to the event but wish to support the cause you can visit Hope for Tomorrow’s webpage here:  http://www.hopefortomorrow.org.uk/
Posted by KPN at 03:22 No comments: