On Sunday April 22nd about 75 protesters travelled to the Bathurst Estate in Cirencester to participate in a mass trespass, calling for land Justice.

Organised by groups including RisingUp and the Land Justice Network the protest included speeches, songs and a marching band. The protesters marched down the main avenue into the estate and then went to a field marked private and climbed the fence to encircle a tree on the land. A banner also appeared over the main road leading into Cirencester saying “No Justice Without Land Justice”. Lord Bathurst and some of his family and wardens watched the peaceful protests unfold.

The organisers said that Land is an essential resource that our society, culture and economy depend upon. However, land ownership in Britain is still one of the most unequal in the world. 0.6% of the population owns 69% of the land. More than a third is still owned by the aristocracy whose ancestors seized it during the Norman Conquest and through the use of land trusts they are avoiding paying inheritance tax while maintaining the concentration of ownership to this day. During the enclosures our ancestors were violently thrown off the land and much of our current common land is being privatised.

RisingUp, who helped organise the action, claim that peaceful civil disobedience is an essential tool in changing things for the better. Mass trespasses have achieved successes in the past, such as at Kinder Scout, which helped to provide bring about the right to roam. 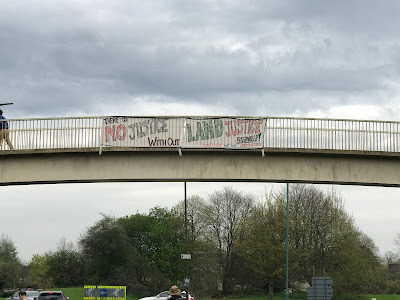 The Land Justice Network had called a week of action from April 14th to 22nd to highlight issues of land injustice calling for land rights.

Simon Bramwell, from Rising Up! In Stroud, said “It's especially relevant to undertake a civil disobedience on the Bathurst Estate, much of which is owned offshore while the owner receives vast subsidies from taxpayers. Some of the land is being sold off for mostly unaffordable housing.”  risingup.org.uk/ facebook.com/RisingUpUK/

Katharine Hallewell of the Land Justice Network added “Everything flows from the land, our well being, our freedom and our equality. We are still living under a system of landownership handed down from the Norman conquests.” landjustice.uk/ facebook.com/landjusticeuk/