Country Matters by The Hodge Jan 18 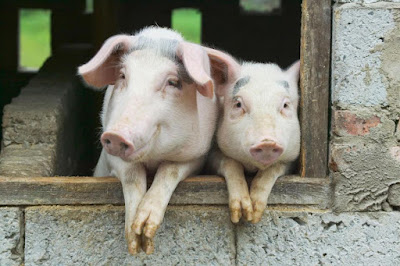 “The pig, if I am not mistaken,
Supplies us sausage, ham and bacon,
Let others say his heart is big--
I call it stupid of the pig.”


With all the representations of the birth of Christ in churches and schools up and down the country, you will see all the main characters; Joseph, Mary and the baby Jesus in a crib, the three wise man and the shepherds. As it all takes place in a manger, then there will be cattle, sheep and goats too and maybe even a donkey. But what of the other major farm animal, indeed the world’s most important one?

I refer, of course, to the pig, the hog, the swine, old grunter. But why should I consider him to be the most important one? Well, quite simply because in the world today more protein derived from pigs is eaten than any other meat. Pigs account for 36.3% of all meat consumed. Chicken is a close second (35.2%) but both are streets ahead of other types such as beef or lamb. This is truly remarkable bearing in mind that many countries with majority religions that forbid the eating of the porker are excluded whereas, to the best of my knowledge, nobody forbids the eating of chickens and they are consumed in every country. And that is where we came in; why there are no pink pigs nuzzling around the crib or rooting in the straw in front of the wise men. Political correctness.

Even though it is a recent phenomenon, political correctness has dictated over many decades that pigs shouldn’t appear in a recreation of the Nativity scene in Bethlehem since Judaism proscribes against the eating of the flesh of the swine, so they just wouldn’t be there, would they? Well, actually, they would. Archaeological excavations in Tell Halif indicate that both wild and tame hogs were commonly consumed in this area of the Near East even though they were prohibited under the terms in the Old Testament still taken as actual by certain religions.

But why should meat from the pig be forbidden? There are many theories, too many to detail here but in times of primitive medicine pigs were blamed for spreading diseases such as leprosy and trichinosis. The real cause though is likely to be a combination of various factors. Firstly, the pig is unsuited to a nomadic existence and many tribes at the time of the Old Testament were not settled farmers but peoples who roamed with their sheep and goats and cattle, looking for water and fresh grazing. They would despise any settled farmers – perhaps epitomised by those keeping pigs – because their land would be prohibited to the travellers.

The Near East was always arid and pigs demand more water than other farm stock although they do not require good grazing in the way that their cohorts do. Whilst the water issue was a real disadvantage, it was more than compensated for by their ability to give birth throughout the year, with multiple offspring at each occasion, and grow faster than other farm stock. But the book of Leviticus called the pig ‘unclean’ and forbade its consumption, (as it does also for rabbits and shellfish).

So the pig was not popular but nor was he banned entirely so that the manger in Bethlehem could quite easily have been home to a few pigs enjoying the company of all the visitors. Now, if your little Johnnie or Jenny was upset that they had been cast as a pig in their nativity play, please don’t rail against their teacher but celebrate the fact that the most important provider of meat to mankind has overcome so many PC obstacles to be given his rightful spot among the other creatures in that holy scene.