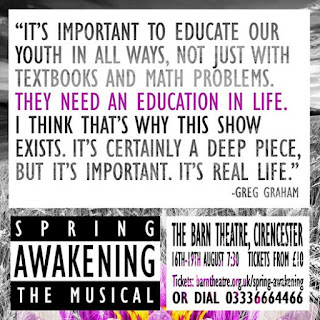 Written in 1890, it took 16 years for Spring Awakening to be first performed as a play at theatres. Years later a musical was written. Often banned or censored in its incarnations, Spring Awakening has made its way to Cirencester in 2017 and is still surprising audiences. With hard subjects covered it seems this story has a timeless quality. It looks at aspects of human nature that can be universally embarrassing and awkward, no matter what time period it occurs in.

The play depicts society as hypocritically repressive, as the individuals in society are often very interested in controversial things. Stripping the characters psychologically naked, we see aspects of them that if it were our own lives, we would probably gloss over. A mother too embarrassed to educate her daughter on reproduction, boys using peer pressure to mock each other and girls who hear a terrible truth from one of their friends, but ultimately do nothing about it. These are themes that are common to many people growing up.

When Wendla becomes pregnant because she has sexual urges without understanding that it leads to pregnancy, her mother casts blame because Wendla doesn’t know better. In a hand to mouth society as it was back then, there wasn’t much room for compassion. Wendla’s mother had a big problem to deal with, but herself lacking the education she forced her daughter down a terrible path.
In all, this a challenging yet entertaining play that mocks how society can try and appear proper and refined, using shame to plug the holes of curiosity. It shows in fact this facade causes a much greater problem compared to educating and openly discussing taboos.
Make sure to get a ticket if any are left before the weekend!

To book tickets follow this link!  https://www.ticketsource.co.uk/event/EMDHEE
Posted by KPN at 11:54