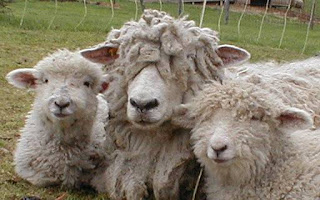 Country Matters
By The Hodge

Wool. One of the most ancient and natural products known to man. Ever since sheep were first domesticated thousands of years before the birth of Christ, man has been using the fibre off the animal’s back to provide warmth and comfort. Indeed, much of the beauty of the Cotswolds that we so admire today was developed by the wool trade which provided so much wealth and industry hereabouts for centuries before the Industrial Revolution.

Wool is a little less important today than it was in times past since we have developed a strange taste for using materials from the oil industry as a substitute – things like polyester, nylon etc. – which are not nearly so efficient and instead we turn up our thermostats and use more oil to keep us warm. Someone’s been very clever here but wool is still available if you want to enjoy the real thing!

So, knowing my point of view about wool and sheep, which do extraordinarily well in our British climate and topography, you would not be startled to learn that I was hugely surprised to see and advertisement before Christmas with the headline I’D RATHER GO NAKED THAN WEAR WOOL.

In fairness I must admit that it wasn’t the headline or the rest of the words that attracted my attention. Instead it was the large photograph of a young blond woman standing naked in a wooded glade clutching a plastic sheep mask. Well, I am human and the advertising people banked on that when planning their campaign.

Having got my attention, I then read on: WEAR YOUR OWN SKIN. LET ANIMALS KEEP THEIRS. WEAR VEGAN. Alicia Silverstone for PETA.

This struck me as very odd. Not the young lady’s name – I’d never heard of her but she’s now achieved her 30 seconds of fame so good luck to her. No, it was the concept by PETA, an animal rights organisation, that shearing wool was the equivalent of skinning a sheep. This is ludicrous! Wool is grown by 99% of sheep – there a few small breeds like the Wiltshire Horn that have been developed not to grow wool – and if they are not shorn in the spring then the wool keeps growing causing serious welfare issues for the animals themselves. A few years ago there was a story in the media about a Merino sheep in Australia that had escaped its field and disappeared into the bush. Having been found again after several years, the creature was almost unrecognisable under a massive coat of wool and could neither see nor hear until it was shorn of its fleece.

Yes, there are some accidents during shearing and some sheep may experience nicks and cuts but generally shearers are pretty good and such minor injuries and never life threatening. Indeed, shaving every day induces occasional nicks and cuts about my person but I’m not aware of PETA campaigning for me to be allowed to grow a bushy beard.

So wool is a natural product which will help keep you warm and may even reduce your heating bills. Its production is a necessary means of keeping sheep comfortable and healthy and maintaining their welfare. It is relatively cheap and plentiful and can be used for clothing, carpets, blankets, insulation and much else.

What are PETA on about and do they really think we’re all so very stupid? I hope that the people of the Cotswolds, an area so imbued with the benefits of wool, are not so easily fooled. By all means look at the advertisement if so inclined, but please don’t believe everything you read.
Posted by Jan Sparrow at 08:16