Rob Beckett at the Sundial Theatre 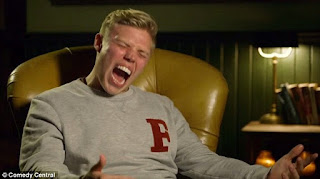 Well known for his appearances on panel shows and TV and internet shows such as Drunk History, where he got plastered and explained Henry VIII’s union with Anne of Cleeves. Proving himself again and again as a key contributor to group shows, I was curious to see what Rob’s solo show was all about.

It was a packed out night with an expectant audience. People travelled from as far as Oxford and Brockworth just to see Rob, so we locals felt an extra bit of gratitude for having so good on our doorstep. When the first hour began, the improvised aspect of Rob’s performance was flawless and welcoming. There aren’t many people who can make you feel better after insulting you, but Rob Beckett managed to do this with a few members of the audience who felt special rather than terrified.

The banter from floor to stage wasn’t over in the second half either. The main show was unique and most of all jolly. Despite being quite slick, it still had some space to incorporate quick chats with the front row. The show was interesting because Rob dances to the beat of his own drum and his timing is completely different to other comedians I’ve seen at the Sundial, with emphasis on points that no one would expect to find humour in. The situations could be mundane or unusual but Rob has a canny knack of making the normal ridiculous and the ridiculous normal. Talking about the modern problem of people on their phones when in front of their relatives, Rob pointed out “do you really think you’re more interesting than the whole internet?” No one was on their phones during Rob’s show however, so for two hours at least, he was.

Check out Rob doing a great performance here
Posted by KPN at 13:15