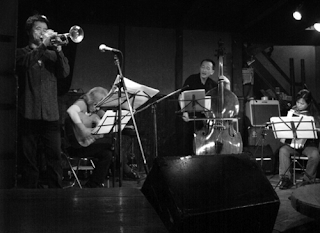 On a warm summers day, there was something different going on in Cirencester on this otherwise normal Saturday night. As people were preparing to go out to the usual watering holes, the Party Loft was open to the public.


The Japanese experimental jazz band Gato Libre came to Cirencester along with support from a local violinist who treated us to an improvised piece. But everyone who had come to the Loft was interested in the out of town band who with a history of acclaim.


I was not sure what to expect of this quartet. A Japanese Abba? Certainly not, the instrumentation was far from conventional, and this music was not easy listening. It was however quite engaging, though at some points it did sound like the theme tune to a mental breakdown from an avant-garde film!


Having previously played Glasgow and Bristol, Cirencester was an unusual destination for the internationally renowned group. The Party Loft was certainly the right size for getting an intimate atmosphere. That is what makes it exciting that in a town of Cirencester’s size a group like Gato Libre would choose to come. The Loft being so centrally located is the perfect spot for a drink and show before a night out further afield.


People had however come in mainly from out of Cirencester. Several were from Stroud, more from Cheltenham. The underground experimental jazz scene certainly breeds loyalty!


The people who came clearly knew what they were in for and got what they wanted from it. Though a band such as Gato Libre are not likely to often come to Cirencester, the venue itself is certainly one worth utilising more for concerts and the bar was well stocked with a nice variety of booze.


If you are looking to put on an event, stage a party or see something going on at the Party Loft, check out the venue, as it is quite a treat when open late!
For more info about the Loft at Night:
Posted by KPN at 08:15